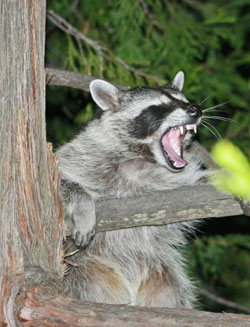 Chelsea: When you buy into “the most coveted new address” in “New York City’s most desired neighborhood,” hot babes in fishnets await you on your couch. [Curbed]
East Harlem: Were you one of the two white thirtysomethings wearing scrubs who brought that injured raccoon to the 110th Street animal shelter Tuesday? Well, you better call the Health Department, because that little mofo was rabid! [Flatbush Gardener]
East Village: Complaints from upstairs neighbors have led to a ban on live music at Avenue B punk dive Manitoba’s, owned by Handsome Dick Manitoba of the Dictators [Brooklyn Vegan]
Prospect Heights: Those long-sought financials for the Atlantic Yards project are finally out. Now just try to understand them. [Brownstoner]
Sunnyside Gardens: Residents want to turn the pretty area into a landmarked historic district, but their state senator opposes the idea. [Queens Crap via Queens Gazette]*
Sunset Park: A high-rise threatens to obscure the view of Lady Liberty from one of the highest points in Brooklyn … and residents are fuming about it. [NY1 via Only the Blog Knows Brooklyn]

*Correction: An earlier version of this story suggested that Sunnyside Garden residents opposed the area’s historic designation while their state senator supported it. Also, the original item was found in the Queens Gazette, not the Queens Courier.

+Comments Leave a Comment
You, With the Pet Raccoon! Time for Your Rabies Shot