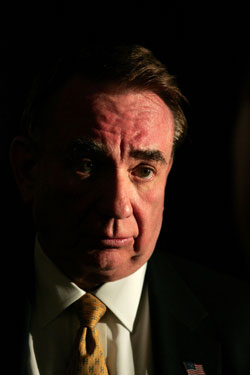 As public figures continue to run their mouths off, the slur-apology cycle now boasts all the spontaneity of the tea ceremony. (Is that offensive? We apologize.) At this point, all one has to do is plug in the names and the insulted ethnicities and handicap the fallout. Today’s culprit: Republican presidential candidate Tommy “Not Fred Dalton” Thompson. The offended party: Jews. The “joke”: “I’m in the private sector, and for the first time in my life, I’m earning money. You know that’s sort of part of the Jewish tradition, and I do not find anything wrong with that.” The apology (relayed via spokesperson): “Governor Thompson recognizes he misspoke … in complimenting the success that Jewish people have had in the United States.”

Seeing how Thompson hasn’t even bothered to damage-control the flap himself, the fallout from this one is not likely to reach Imus levels. It probably won’t even ruin the man’s campaign, mainly as there’s not much to ruin; at this point, Thompson’s fund-raising operation is outpaced by Dennis Kucinich’s. Clearly, the man could use some Jews on his staff.