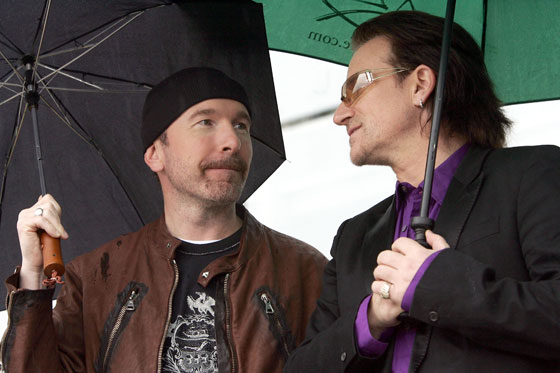 The Edge and Bono together on a rainy day in 2004.Photo: Getty Images

Three years ago, Playbill posted a news item that seemed so ludicrous as to be a prank: An upcoming Spider-Man musical, it announced, would be directed by Julie Taymor, with music written by Bono and the Edge. Well, SuperHeroHype.com claims to have unearthed the casting notice for a July staged reading, and it looks either legit or extremely well faked: “The burden of being a superhero, his guilt for his role in his uncle’s death, as well as his debilitating crush on Mary Jane all weigh heavily upon him. Great pop/rock voice.”

We assume Bono and the Edge are writing original music for this, but why should they? We bet they could just repurpose their catalog and turn it into Spider-Man: The U2 Experience. Lyrics to “I Still Haven’t Found Uncle Ben’s Killer” are after the jump.

I have climbed tallest buildings

I have swung through the streets

Ben he told me before he died
“Pete, don’t be ruled by foolish pride”
Then he got shot by a burglar
Who I let escape

Spider-Man 3 Soundtrack and a Musical [SuperHeroHype.com]

+Comments Leave a Comment
Look Out! Here Comes the Edge and Bono!