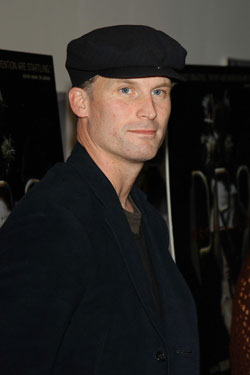 It seemed appropriate that on that quasi-apocalyptic Sunday afternoon when the nor’easter sky released eight inches of rain on New York City that Matthew Barney had a rare live performance. In an enormous empty one-story warehouse not twenty feet from the East River in Long Island City, a standing crowd of around 200 populated by numerous art-student types, famous artists like Cindy Sherman and Vito Acconci, sundry museum curators, and icons like David Byrne and Björk witnessed what seemed like a cosmic cross between an Egyptian funeral, the end of the world, the Rape of Europa, a demolition derby, a porn film, and voodoo ritual. Whatever it was, it freaked a lot of people out.

With good reason. The 80-minute performance included a sculpture of a smashed-to-smithereens 1967 Chrysler; Barney performing with a dog sitting in a harness on top of his head; Aimee Mullins, the famous no-legged athlete who co-starred in one of Barney’s epic Cremaster films, outfitted in a full-length glittering silver ball gown on a stretcher atop the car; a small marching band in terrorist masks and what looked like IRA military uniforms; Barney methodically removing bits of the car’s engine and putting them in these weird funeral urns; and, last but not least, a gigantic bull garlanded in flowers with its long, huge horns painted gold.

This bull was not only led in from outdoors by handlers dressed in tartan plaid; it was accompanied by two women, each wearing a black veil and a black sweatshirt but otherwise bottomless below the waist, and shaved. At some point, after walking around the crowd several times, each woman held her arms aloft and bent over backward until their hands touched the ground. Then, one of the girls emitted an arc of pee onto the cement floor. The other seemed to want to also but couldn’t. Who could blame her? It was freezing in there.

The bull was guided to the Chrysler. It appeared as though it was being coaxed to mount the car, but after three tries, the tenders took the bull back outside. All the performers followed and that was the end of this astonishing Dionysian journey to the afterlife. How great it is when an artist is willing to fail flamboyantly and then ends up making something extraordinary; what amazing things can happen in New York any time anyone wants to make them happen. —Jerry Saltz

+Comments Leave a Comment
Matthew Barney, the Bull, and the Chrysler