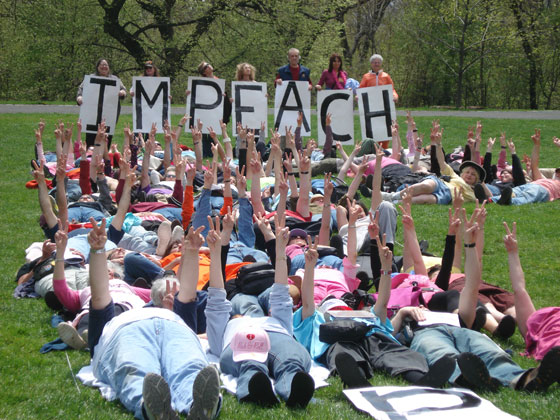 Protesters spell out “impeach” at a demonstration in Central Park on Saturday. Photo: Juli Weiner

Tucked among several family reunions on Saturday on Central Park’s Great Hill was a protest calling for the impeachment of President George W. Bush. About 200 gathered for this “A28” event (similar protests were held nationwide and, in the city, at Tompkins Square Park and Coney Island) organized by the antiwar group World Can’t Wait. The event drew the usual panoply of protesters: Code Pink (“women for peace”), Democrats.com (“the aggressive progressives”), and someone in an Uncle Sam costume. There were chants, there were signs, and even a human representation of the word “IMPEACH.” World Can’t Wait’s national director Debra Sweet chastised the “smug cynicism” of today’s young people but expected a near-certain presidential veto of a timetable for Iraq withdrawal this week would inspire some action. “If that doesn’t serve as a catalyst for impeachment … ” she said, trailing off. Sweet is helping to plan a post-veto protest in Times Square. The Reverend Lennox Yearwood of the Hip-Hop Caucus came up from D.C., fresh from an arrest for marching onto the Senate floor. “We’re in solidarity,” he said, but he thought protests could only do so much. “The revolution will not be televised. It will be uploaded.” —Marc Tracy

+Comments Leave a Comment
Say What You Will About Liberals, But They Can Spell