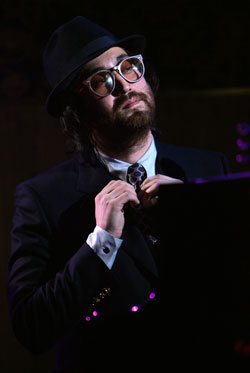 Considering he’s been a famous New Yorker since birth, you’d figure Sean Lennon would get gigs at New York’s top concert venues. But, in fact, tonight marks the first time John and Yoko’s son will headline medium-size Irving Plaza (or should we say Fillmore New York?). He’s pretty psyched, even if it means playing for a crowd of old friends who’ve been witness to Lennon’s personal soap opera, so he’s focused on putting on a good show. We spoke to him about it — and his mom and the state of the record business — last week.

So you’re playing Bowery. Is it something that you’ve always wanted to do?
I’m actually playing Irving Plaza.

Wishful thinking, I guess.
Well, I did Bowery last time! Uh, it definitely feels kind of exciting to headline a place. I’ve played there opening for other people before, but I’ve always wanted to headline Irving Plaza because it just kind of felt like a certain milestone. It’s a big deal. I’m really excited about it.

But Irving has a kind of disappointing ambience.
Well, the vibe isn’t as good, but the sound system is great, that’s why I wanted to play there.

Are you going to be doing anything special for the Irving show, given that it’s in New York?
Well, I mean, I always get more nervous when I’m in New York, just because all my friends are there. So I’m just going to focus on doing a great show, because, you know, a lot of times your best shows are kind of, like, sort of in the middle of nowhere, because there’s like no pressure.

And there’s nobody to hear it.
No, people are there — but I mean, people that you don’t know and that you didn’t grow up with, you know? Then the New York shows can turn out to be a bit difficult, so I’m just going to try to apply my experiences in the past and just not get hung up on the fact that I’m playing for all my friends.

How’s the reception to the tour been?
Really rewarding. I’ve played all these towns in America, like before, and not sold out, you know, and now all the shows are selling out, you know, and so it really feels good. It feels like I’m getting somewhere, and my fan base is kind of evolving in a nice way.

Have you had a bad reception anywhere from crowds or the press?
I haven’t had a bad reception from the crowd since I was opening for the Butthole Surfers, in like the nineties and we’d go out there and there’d be a bunch of really hard-core 15-year-old boys giving us the finger and, like, yelling and screaming. And then there was that time I opened for this German death metal band in France and I had all these skinheads throwing beer bottles at my head. But those days are kind of over, because now I pretty much tend to headline my own shows, so the people who come tend to be people who want to see me play — they don’t come and attack me, or anything. I don’t think they would bother buying the ticket if they didn’t like me.

Your mom has a tribute album out now. Are you competing for record sales?
Not exactly. My records don’t really sell, so there’s no competition.

What’s in your backstage rider for the Irving show?
Technically I don’t have a rider. I just ask for a little money from the venue so that I can go out and buy watermelons and hummus. It just seems easier to buy my own food.
—Jada Yuan

THE FEED
14 mins ago
2022 midterms
2022 midterms
Get Used to Close Elections With Huge Consequences
By Ed Kilgore
We may have entered a new era of political gridlock in which swing voters are scarce and evenly matched parties clash again and again.
22 mins ago
hurricane ian
hurricane ian
Hurricane Ian Verges on Category 5 As It Makes Landfall in Florida
By Intelligencer Staff
With 155-mph winds and ten-foot storm surges, the massive storm barrels into densely populated southwest Florida.
22 mins ago
games
games
Brett Favre Was Always Pretty Awful
By Will Leitch
Thanks to his legion of defenders, the ex-QB thought he could get away with anything. An egregious scandal in Mississippi shows there are limits.

9:59 a.m.
russia
russia
It Sure Looks Like Someone Blew Up a Gas Pipeline Connecting Europe to Russia
By Kevin T. Dugan
Everything we know about a massive leak in the middle of the Baltic Sea.
9:00 a.m.
tremendous content
tremendous content
The Fetterman Campaign Should Just Hire Dr. Oz
By Margaret Hartmann
Oz created a new slogan for his opponent, saying his hoodies show that “he’s kicking authority in the balls.”
8:00 a.m.
crime
crime
Inside the Ransomware Gangs That Extort Hospitals
By Renee Dudley and Daniel Golden
They shut down patient care and put lives at risk. Would the pandemic finally slow them down?
9/27/2022
early and often
early and often
Will Any Republicans Jump Into Trump’s 2024 Snake Pit?
By Ed Kilgore
A lot of Republicans might be tempted to take on a weakened Trump in the primaries, but they’ll remember how he treated his 2016 rivals.
9/27/2022
the city politic
the city politic
The Growing Cover-up of Rikers Island Deaths
By Matt Stieb
The head of the city’s jails told aides to keep a dying man off his “department’s count,” according to the New York Times.
9/27/2022
just asking questions
just asking questions
Is the Fed’s Cure for Inflation Worse Than the Disease?
By Benjamin Hart
Economic analyst Ryan Sweet on the tricky balance Jerome Powell is trying to strike and how Europe’s woes could spread to America.
9/27/2022
early and often
early and often
‘It Was All a Hoax’: Migrant Sent to Martha’s Vineyard by DeSantis Speaks
By Paula Aceves
A Venezuelan migrant on his mysterious, terrifying journey to Martha’s Vineyard as a political prop of Ron DeSantis.
9/27/2022
hurricane season
hurricane season
Tampa Could Be a Bull’s-eye for Hurricane Ian
By Matt Stieb
The quickly intensifying hurricane could bring storm surges of up to ten feet to the low-lying Tampa metro.
9/27/2022
early and often
early and often
If You Really Love Democracy, You Can’t Love the U.S. Senate
By Ed Kilgore
Mitch McConnell and Kyrsten Sinema are big on respecting the Senate as an institution, but valuing democracy means working to minimize its impact.
9/27/2022
at home in asian america
at home in asian america
For Domestic Workers, the Asian Class Divide Begins at Home
As told to Arya Sundaram
Five nannies from the Philippines, Nepal, and China open up about what it’s like to work for their Asian American employers.
9/26/2022
space
space
NASA Just Hit an Asteroid to See If It Could
By Chas Danner
Take that, floating rock.
9/26/2022
early and often
early and often
McConnell Seeks Revenge on Manchin for Inflation Reduction Act
By Ed Kilgore
Sheer spite, not energy policy, is motivating a Republican effort to kill Manchin’s energy-permitting bill.
9/26/2022
tremendous content
tremendous content
Even Donald Trump’s Family Barely Uses Truth Social
By Margaret Hartmann
Trump should blame himself for the social-media site’s legal and financial woes. But if he’d rather find a scapegoat he doesn’t need to look far.
9/26/2022
the money game
the money game
Monday Was Just Another Horrible Day for Markets
By Kevin T. Dugan
There are so many things going wrong that it’s hard to keep track.
9/26/2022
early and often
early and often
Edward Snowden Is Now a Russian Citizen
By Matt Stieb
The whistleblower’s lawyer claims he will not be eligible to fight in Ukraine.
9/26/2022
early and often
early and often
Unraveling Trump’s Bogus Election-Denial Arguments
By Ed Kilgore
Sixty percent of Americans have an election-denier on the ballot this year. Here’s what they believe specifically and what that means for democracy.
9/26/2022
screen time
screen time
TikTok Is the New King of Social Media. Now What?
By John Herrman
The video-sharing service faces perils old and new.
9/26/2022
at home in asian america
at home in asian america
Asian America Learns How to Hit Back
By Esther Wang
The desperate, confused, righteous campaign to stop Asian hate.
9/26/2022
on with kara swisher
on with kara swisher
Chris Cuomo Wants to Move Forward. Can He?
By Intelligencer Staff
Kara Swisher has a long, frank talk with the former CNN anchor about the scandals that got him fired, his brother, and if his comeback will pan out.
9/24/2022
exhibit a
exhibit a
It’s Blindingly Clear the Feds Failed to Investigate Trump’s Finances
By Ankush Khardori
Letitia James’s fraud lawsuit is also an indictment of the Justice Department.
9/23/2022
2022 midterms
2022 midterms
House Republicans Release Their Vague ‘Agenda’ for 2023
By Ed Kilgore
There’s nothing about climate change, Russia, or extremist threats to democracy, and their abortion stance is very hard to find.
9/23/2022
the money game
the money game
Why the Global Economy Just Cracked Up
By Kevin T. Dugan
A recession is all but certain.