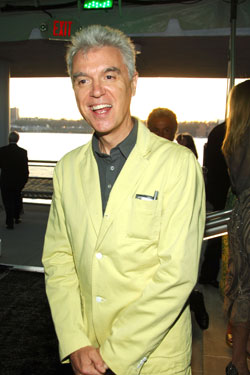 In a canary-yellow suit last night at the dinner for American Patrons of Tate, musician David Byrne (who turns 55 on Monday) alluded to this week’s New York cover story on the demise of Socialite Rank. “It’s kind of a tease to read about it and be told it was closed down, because you know it’s still there, sitting on a server somewhere,” he said. So did he follow the site? “Nooooo!” exclaimed the former Talking Heads front man, with the same semi-shocked expression that accompanies many of his remarks. “I was above that kind of shit in high school.” Artist Cindy Sherman, standing nearby, also claimed not to have read Socialite Rank, though she copped to recognizing a few of the faces she saw in the New York story. But she denied knowing that her Untitled 92 is estimated to fetch between $700,000 and $1 million at Christie’s today. We doubt that. —Tim Murphy

+Comments Leave a Comment
At Least They Have Park Avenue Peerage