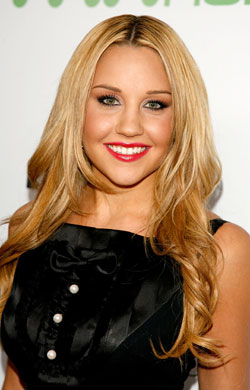 TV Upfronts Week continued yesterday at the Ritz Carlton Lucky Club where a myriad of fashion, accessory, and beauty companies set up camp and awaited celebrities in need of free stuff. David Boreanaz of Buffy and Bones had a shy but determined approach to the Cosabella lingerie. Nothing sweeter than a man shopping for lingerie with ten pairs of eyes and a camera on him.

Among the young starlets “shopping” was Amanda Bynes, former star of Nickelodeon’s The Amanda Show. A child stand-up comic, Bynes has no plans to return to the clubs as an adult. “Times Have Changed, I don’t know if I could take the heckling,” she says. Her new project is a retelling of Snow White set in college. Instead of seven dwarves, she’ll have seven dorks.

Bynes left her spree wearing layers of layers of Lia Sophia jewelry and toting three and a half bags of swag and some Keds shoes. Though she lives in Los Angeles, Bynes indicated a preference for New York: “The style is cooler here, it’s chic, so much more put together. It’s tougher because at any moment you have to be able to walk fifteen blocks. I really want to move here — that’s my secret. I’m looking!” —Fiona Byrne

+Comments Leave a Comment
Boreanaz, Bynes Stock Up on Stuff They Could Buy Themselves