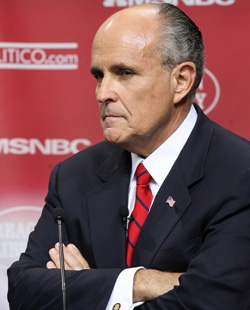 One of the sillier conventions of post-debate analysis — the Republican presidential candidates met last night at the Reagan President Library in California — is the discussion of whether a candidate “looked presidential.” The intent is to determine which politician appeared to have the gravity and intelligence to occupy the Oval Office — and it’s a futile exercise, as standing up to Chris Matthews is hardly an indicator of the ability to handle, say, a nuclear standoff. That said, in the first debate among the GOP contenders, Rudy Giuliani came off looking distinctly mayoral.

It wasn’t just the way he worked a reference to his record running New York into nearly every answer — Giuliani’s eight years at City Hall are of course the high point of his career in elective office (though the references were also a reminder that his years as mayor are his only experience in elective office, and in one answer Giuliani equated George W. Bush with David Dinkins). It was also that whenever Giuliani was drawn into a larger topic, his answers were strikingly small. The Supreme Court overturning Roe v. Wade? “Okay.” The Supreme Court NOT overturning Roe v. Wade? “Okay.” This is part of a strategy with an appealing cleverness: Giuliani knows that his record on the hot-button social issues — abortion, guns, gay rights, the Confederate flag — is a loser in the Republican primaries, so he defers to another authority, usually the states, and changes the subject as quickly as possible. It also plays nicely into the modern Republican hatred of a strong federal government. But the strategy is oddly dissonant and diminishing. Here’s a man running for the most powerful job in the world, at a moment when we’re at war — and yet he doesn’t want to be the decider. Wasn’t Rudy the guy who wrote a best-seller called Leadership? —Chris Smith