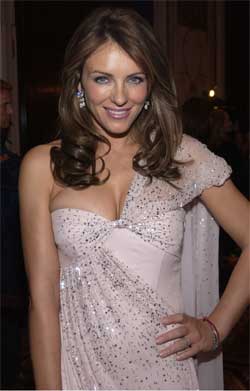 Elizabeth Hurley was in town recently for the Breast Cancer Research Foundation’s Hot Pink Party at the Waldorf, and we had to wonder where the shagedelic star has been lately: Her last movie, Serving Sara with Matthew Perry, opened in the United States a full five years ago. Her explanation? “I just can’t really make movies as well as be a mum and live in England,” she told us. “Something had to give, and I decided it wasn’t going to be my relationship with my son. I decided I wanted to take him to school every day, which I do.” Hurley, who married Indian businessman Arun Nayar in a bi-continental ceremony two months ago, said she hasn’t given up working, just acting. She’s a spokeswoman for Liz Claiborne and has started her own beachwear company. And she’s become a farmer. “I have a large farm in the country in England,” she said. “And it’s all organic. So basically, right now, I’m really into produce.” —Rachel Wolff