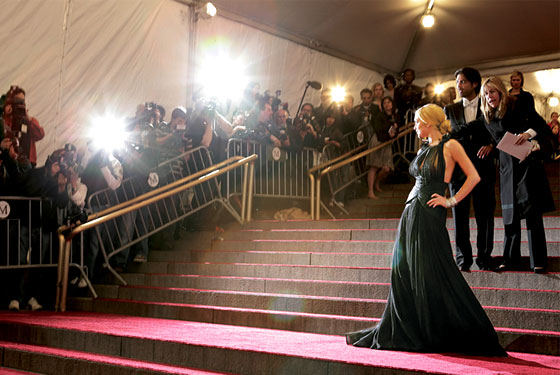 It was a good week to consider one’s legacy, as the world’s most beautiful women — Scarlett, J.Lo, Cameron, et al. — descended on the Met decked out in some of the world’s shiniest dresses to honor a long-dead, but once terribly important, French designer. Mayor Bloomberg spent the week giving high marks to himself, for fulfilling campaign promises. But he denied that he was seeking immortality in Albany by gunning for Eliot Spitzer’s job in 2010. (State Republican chief Joseph Bruno’s insistence notwithstanding, Mayor Mike said any reports of Albany envy were “totally made up.”)

The federal agents busted a terror plot in South Jersey, in which six men hoped to infiltrate Fort Dix with pizzas, allowing them to live in infamy. The miraculous recovery of hyperrich Governor Jon Corzine had Garden Staters wondering what supernatural level of medical care money can buy. A new study showed that city high schoolers, evidently stressed out from cell-phone and aluminum-bat deprivation, pass their leisure hours getting plastered. Embattled MTA chairman Peter Kalikow stepped down, but will be remembered for the MetroCard.

The return of Roger Clemens to the Yankees was subtly announced 1984-style on the stadium Jumbotron. Mets players shaved their heads, then promptly beat the Giants. “No Samsons on this team,” pointed out the play-by-play man. A former Mr. Chow waiter sued his ex-boss, who he said ruled with an “iron baton” and forced him to curl up on the floor like an overpriced salt-and-pepper prawn. HBO chief Chris Albrecht resigned after getting arrested in Vegas on fight night. Naomi Campbell’s community-service diaries revealed that she’s just a regular gal who prays daily. And the Times Square Alliance claimed that the Crossroads of the World lures $55 billion in commerce to the Big Apple, most of it presumably in the form of three-for-$10 T-shirt purchases. —Mark Adams