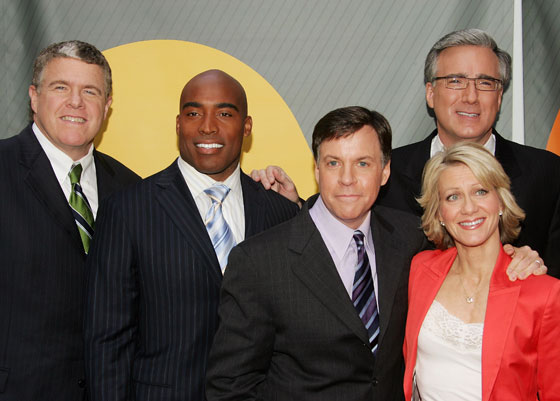 Tiki Barber just retired from football, but has his throwing arm already atrophied? At NBC’s upfront presentation yesterday, the former Giant and the rest of the Sunday Night Football sportscaster team were trotted out to face advertisers. Barber and colleagues Jerome Bettis and Chris Collinsworth rehashed a bet from last year: Who could toss a football into the balcony of Radio City Music Hall?

With his play-by-play, Bob Costas framed the narrative: Bettis (last year’s champ) against the veteran Collinsworth and Barber, the rookie. Bettis again made it to the balcony on first try. Collinsworth, who wore sneakers with his suit to avoid the slip he blamed on his failure the year before, fell short the first toss. He paid $50 for another football from Costas and made a second attempt. “My job is to make you two look bad,” said Barber. But he threw a high wobbler that barely made it to the back of the orchestra seats. Shaking off the humiliation, Barber bought more footballs from John Madden and Al Michaels and shot off a couple of bullets to the second mezzanine. —Jada Yuan

THE FEED
17 mins ago
the national interest
the national interest
Trump Brought Nazis Into the GOP. DeSantis Won’t Expel Them.
By Jonathan Chait
White nationalism is not just a Trump problem.
10:25 a.m.
the money game
the money game
13 More Disturbing Revelations About Sam Bankman-Fried
By Kevin T. Dugan and Matt Stieb
It’s been weeks since the dramatic crumbling of his crypto empire, and we’re still learning about the mess left behind by Bankman-Fried.
8:00 a.m.
social studies
social studies
Do You Have a Right Not to Be Lied To?
By Jeff Wise
Freedom of speech is being reconsidered by a group of legal scholars, who argue it is not absolute and may be outdated in a world of disinformation.