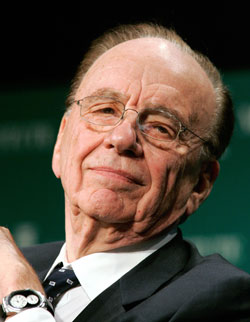 “Executives at Dow Jones declined to comment for this article” is probably the least surprising sentence to be found in today’s Times. The article in question is devoted entirely to guessing if, and by how much, the Wall Street Journal is in the black. The answer is stark: “barely, and maybe not for long.”

As a whole, WSJ’s parent Dow Jones just about breaks even; so does its iconic media property, which, despite a weekday circulation of two million, suffers from a bad case of advertiser flight. (The Website fares better, of course.) So far, WSJ’s 2007 ad figures are about 10 percent off the already none-too-rosy projections. The moderately juicy inside-baseball part, buried in the last few paragraphs of the Times piece, blames the musical chairs at the top of the Journal’s ad division, specifically the loss of exec Judy Barry to a squabble with Dow Jones CEO Richard Zannino. Needless to say, Murdoch’s ghostly visage hovers over the story’s every downbeat sentence: make the rupees, or face the Rupe.