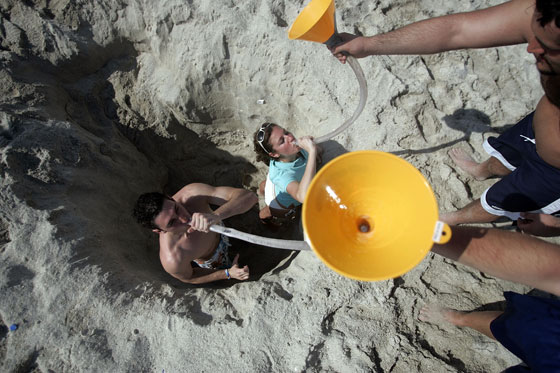 Today’s Times profiles a class at SUNY Stony Brook devoted to teaching kids the difference between “good” and “bad” journalism. As we meet the students, they’re enthusiastically parsing an article titled “Girls Go ‘Wild’ For Booze, Sex” for instances of sloppy research and biased news-gathering. The bane of our era, they are told in many, many words, is the temptation to massage data until it fits a preexisting viewpoint (we thought Stephen Colbert simplified the whole notion a year ago, by coining the term truthiness). So, how did the Times article itself do, pitted against Stony Brook’s exacting standards?

Well, there’s the sweeping, and vague, “officials hope that 10,000 Stony Brook students will take the course.” (Children: “Officials hope” Iraq will stabilize before 2008.) Every interviewed student reports nothing short of a transforming experience (“I think I learned more skills … than I did in any other course in college”): news or propaganda? Where is the other side? Finally, the source of the thoroughly discredited booze-and-sex story is conspicuously omitted — it is referred to only as “a newspaper.” It was, in fact, the Boston Herald, a competitor to the Times-owned Globe. Here, the Times appears to be teaching a master class in what’s either very good sportsmanship or very passive aggression. Or maybe it doesn’t want the students to know they could have cheated all along by parroting the Washington Post’s Howard Kurtz — who took the same poor Herald article behind the shed back in May 2006.

Telling Bogus From True: A Class in Reading News [NYT]

+Comments Leave a Comment
‘Times’ Not Fit For Journalism Students