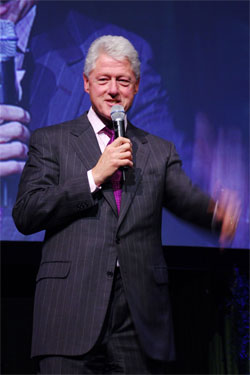 Former President Bill Clinton popped up at the city’s Climate Summit today to lend his name and considerable funding clout to greening the city. Mayor Bloomberg’s PlaNYC calls for city buildings to decrease carbon emissions by 2017, and Clinton has brokered a deal that might actually achieve that goal. Five banks (including local institutions JPMorgan Chase and Citibank) committed $5 billion to finance new insulation and lighting for buildings in sixteen cities, including New York. Four energy companies will audit the work at discount prices, and three trade groups will train minorities and the unemployed to rehab the buildings. Clinton didn’t stop the giving there — Bloomberg predicted a “creative ongoing partnership with the Clinton Foundation,” which we guess will be put to work on congestion pricing. With a cajoler-in-chief like Clinton at his side, Bloomberg just might be able to persuade state lawmakers to support it. —Alec Appelbaum