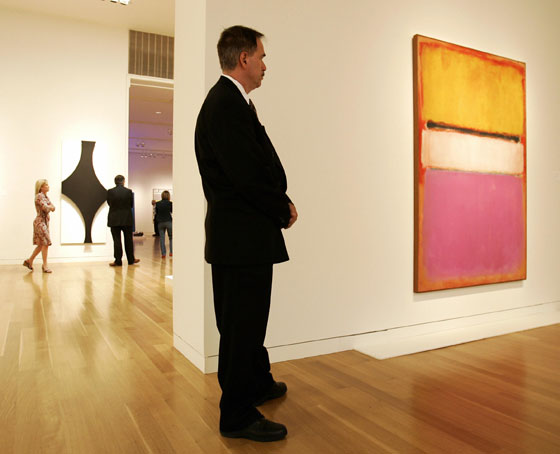 Further signs that the art market is officially nuts: Yesterday at Sotheby’s, a Rothko got hauled away for nearly twice the estimate by our favorite kind of buyer — the Bearded Mystery Collector. The sale price, $72.8 million, is the new world record for a piece of contemporary art. The painting is titled White Center (Yellow, Pink and Lavender on Rose) and will look great over a $40 million dollar couch. The seller was David Rockefeller, MoMA’s chairman emeritus, a fact which may actually signal that the market’s about to turn: After all, if anyone would know when it’s time to unload a Rothko, it would be Rockefeller. As usual, Sotheby’s won’t blab about the buyer’s identity. We’re voting a Russian dude (perhaps the same one who bought Picasso’s Dora Maar au Chat for $95 million last May?), based on the combination of the beard and yesterday’s sudden introduction of the ruble to the room’s currency board. So the painting may be on its merry way to Mr. Marcus Rothkowitz’s birthplace as we speak.