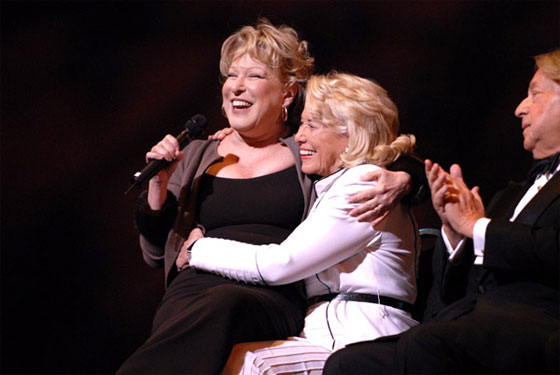 Bette Midler sits and sings on Liz Smith at the Literacy Partners event, “An Evening of Readings.” Photo: Gary Gershoff/WireImage.com

Though Literacy Partners’ annual event didn’t boast the grub of the Beard Awards across the square at Avery Fisher Hall this week, Liz Smith rounded up pals to read in honor (and support) of her favorite adult-education program. Guests including Barbara Walters, Taylor Holland, and a very tardy Martha Stewart were treated to readings by Vanessa Redgrave, Alexander McCall Smith, Bob and Lee Woodruff, and Frank Langella. Langella read from A Tree Grows in Brooklyn, but everyone else touted recent or upcoming projects. Bette Midler was there too but opted to sing a number from Smith’s lap. After the jump, Liz discusses her own literacy issues and wonders what to send Paris in jail.

Do you have any grammar pet peeves?
The difference between “you and I” and “you and me.” That drives me crazy!

Do you correct people if they misuse it?
If I dare, if they’re not too important. It’s the worst universal mistake. Half the time it just sounds pissy and elegant to say I when you should be saying me.

What about in writing? Misspellings?
I don’t pay much attention to spelling. I don’t think many people are very good spellers anymore, and I’m not great. But I’m better than most of my Phi Beta Kappa friends.

What have you read lately?
I read a fabulous book called The Emperor’s Children. I think I missed it last year, but it was the best novel I’ve read in ages. I don’t read much fiction; I just read history and biography.

What would you tell Paris Hilton to read in prison?
I don’t think Paris reads! I think if some guy is shtupping you up the backside and you’re being filmed and you can wave at the camera, you have a certain insouciance, to say the least.

Hope we won’t see a prison video.
Exactly. It’s a pretty severe sentence. I mean, she is an idiot so … But you don’t need to go to jail just because you’re an idiot! I think I’ll send her Edith Wharton. What do you think she’ll read by Edith Wharton? —Jocelyn Guest

+Comments Leave a Comment
You and Me and Liz Smith