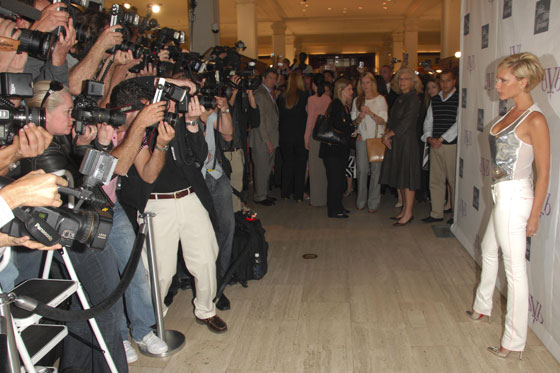 The jury is still out on whether Americans can be forced to care about David Beckham — the whiny-voiced British footballer plays his last game for Real Madrid this weekend, after which he’ll descend upon L.A.— but if yesterday’s Saks Fifth Avenue appearance is any indication, we’ve already made up our minds about his wife, Victoria. The former Spice Girl was there to launch her new sunglasses and denim line, DVB, and initially it seemed as if a lot of people showed up. But as we listened closely to the confused buzzing behind cell-phone-camera flashes, giggles, and tittering from starstruck shoppers, we overheard one person explaining that “Angelina Jolie is here to promote her new clothes,” while a Saks security guy admitted, “We’ve got people all the way down the block. But it’s majority press that’s here.”

Beckham, in skinny white jeans, a silver-sequin tank, silver stilettos, and a platinum bob, did indeed look tiny but wasn’t as scarily skinny as paparazzi report. True to form, she did not smile once, and in fact she looked a little nervous — a sweaty onlooker described her, accurately, as “boring and sour.” The question everyone wanted answered was “What do you think of your new best friend Katie Holmes’s haircut?” But Beckham would deign to answer only one question. When a reporter from a celebrity weekly asked how her clothing line was going, she replied, “Good.” Her name recognition here? Not so good. —Shira Levine

THE FEED
9:10 a.m.
intelligencer chats
intelligencer chats
The Political Costs of Ted Cruz’s Cancún Vacation
By Gabriel Debenedetti and Benjamin Hart
This scandal may do lasting damage to the Texas senator — but he’s got plenty of time to ride it out.
8:58 a.m.
conservatism
conservatism
The $15 Minimum-Wage Debate Clarifies the Partisan Economic Divide
By Eric Levitz
Republican “populists” oppose a $15 minimum wage because they stand for predatory small-business owners, not working people.
8:00 a.m.
politics
politics
The New CPAC Makes the Old CPAC Look Like the #Resistance
By Ben Jacobs
Trump critics are out, election truthers are in.

Pfizer and BioNTech Studying Third Covid-19 Vaccine Dose to Fight New Strains
—Wall Street Journal
2/25/2021
the sports section
the sports section
Why Did Someone Pay $5 Million for a Baseball Card in 2021?
By Joe DeLessio
The pandemic isn’t the only reason the sports-card market has been booming lately.
2/25/2021
coronavirus vaccine
coronavirus vaccine
How to Sign Up for a COVID Vaccine in New York
By Matt Stieb
Two of the state’s largest vaccination centers opened this week at Medgar Evers College in Brooklyn and York College in Queens
2/24/2021
south dakota
south dakota
South Dakota Attorney General Reported Hitting a Deer But Fatally Struck a Man
By Matt Stieb
New details cast doubt on Jason Ravnsborg’s initial claim that he thought he hit a deer, not a person. He is now facing impeachment.
2/24/2021
sex scandals
sex scandals
Fanne Fox, Wilbur Mills, and a Tale of Washington Hubris
By Ed Kilgore
The woman involved in the implosion of one of Washington’s most bloated careers has died, and with her a golden era of D.C. sex scandals.
2/24/2021
media
media
Why Did First Look Let Go of Laura Poitras?
By Sarah Jones and Peter Sterne
A co-founder turns critic.
2/24/2021
goings
goings
Scandal-Plagued McKinsey Ousts Leader
By Andrew Rice
It is telling that partners at the elite and secretive consulting firm have chosen not to give Kevin Sneader a second term at the helm.
2/24/2021
the democrats
the democrats
Democrats Must Stop the IRS From Eating the Unemployed’s Stimulus Checks
By Eric Levitz
If Biden doesn’t forgive the taxes on millions of Americans’ unemployment benefits, they might not forgive him for their giant surprise tax bills.
2/24/2021

U.S. Senator Manchin to back Biden pick for interior secretary
—Reuters
2/24/2021
special delivery
special delivery
Sure, Laugh Away. But Every Big Vehicle Should Look Like the New USPS Truck
By Alissa Walker
We admit it’s goofy-looking, but it’s a much safer design for crowded cities.
2/24/2021
politics
politics
Former Aide Accuses Governor Cuomo of Sexual Harassment
By Nia Prater
Lindsey Boylan says she endured years of sexual harassment from Cuomo, and resigned in 2018 after he kissed her in a meeting without her consent.