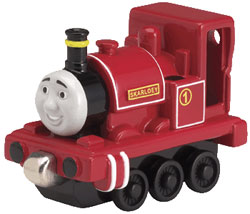 Brooklyn preschoolers who think they can and think they can are being confronted with a rude reality: They can’t. Play with their Thomas the Tank Engine toys, that is. Two dozen wooden trains and accessories from the wildly popular Thomas & Friends line are being recalled over fears of lead in the paint. Thus, many parents spent the weekend swiping their kids’ favorite toys. “My son is a Thomas freak,” says Kate Myers, mother of a 4-year-old and owner of Brooklyn Play Spot. “I picked up all the trains, and my son said, ‘Get me my trains!’ Like a dictator. He’s totally panicked. I said, ‘We have to be careful and make sure the trains aren’t sick. We’ll all have to get Band-Aids if they’re sick.” The manufacturer, RC2 Corporation, announced the recall last Wednesday on 1.5 million toys sold between January 2005 and June 2007. Stores were apparently informed earlier than the public and returned their stocks immediately.

The recalled trains are predominantly red, so the blue Thomas, a.k.a. Engine No. 1, is still safe. It’s his Friends that are the problem: James, No. 5, a red engine with a pleasant face; Skarloey, a small engine. “My son is gonna have a hard time with this — he doesn’t even like empty boxes to leave the house,” says Ken Page, the father of a 6-year-old who owns the recalled models. “He has truly adored the battery trains. We stick pictures of his face on them as they go around, and we put little dolls and toys on them and have our cat stand over and be like a bridge. We get all excited. I’ll tell him that there’s something in there that might not be good for us, and then we’ll see what we can do to make ourselves feel better.” —Arianne Cohen