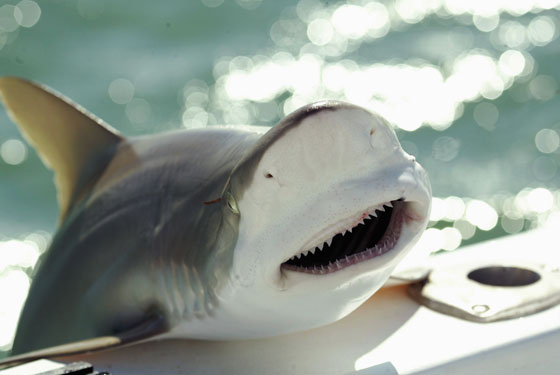 This shark is from Key West and is being used for illustrative purposes only. Photo: Getty Images

The annual shark tournament at Star Island Yacht Club in Montauk started today, and the Humane Society was prepared. In a campaign dubbed an “anti-sportfishing jihad” by one angler, the group, not content to protect innocent puppies and kittens, is now defending the fierce predators. “It’s not the killing,” said their rep, John Grandy. “It’s the spectacle, the orgy of death that is represented by hauling these magnificent animals up. The message is that sharks don’t matter. Their suffering doesn’t count.” The society hired a plane with a banner reading End the cruel shark tournament now! and has plans for a protest, but the fishermen aren’t biting.

“They’re full of shit,” said Gene Kelly, who runs the Montauk Sportfishing charter service. “They’re saying that live sharks are being brought in and being butchered alive in front of children, but they’re dead when they come in.” Captain Jay Rigano, prepping the Lori-Jay 2 for the contest, said, “We don’t pay any attention to them. There are rumors they may block the entrance, but if they do, we’re going to run them over.” —Janelle Nanos