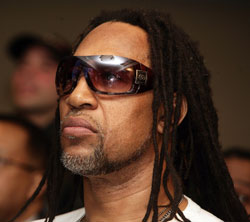 Kool Herc at a press conference in 2006. Photo: Getty Images

Senator Charles Schumer — because when you think hip-hop, you think Chuck Schumer — was on hand today to celebrate the official designation of 1520 Sedgwick Avenue as the birthplace of the genre. Ex-tenant DJ Kool Herc, whose parties in the building’s rec room were hip-hop’s Big Bang, led the drive and delivered: The Bronx address is now eligible for the State and National Register of Historic Places and could even, despite its tender age, squeak by as a National Historic Landmark. Of course, apart from a plaque on the wall, the designation might have a practical dividend. It could help keep 1520 Sedgwick rent-stabilized, or at least make it harder to take the building’s 100 units out of Mitchell-Lama and convert them to market-rate condos. This puts the owners, who announced their intent to do just that in February, in a strange position of rooting against the very thing that makes the property interesting. As for Laurence Gluck of Stellar Management, who’s long been angling to take the complex off their hands, he doesn’t strike us as a Kool Herc fan.

+Comments Leave a Comment
Will Hip-Hop Landmark Be Saved From the Open Market?