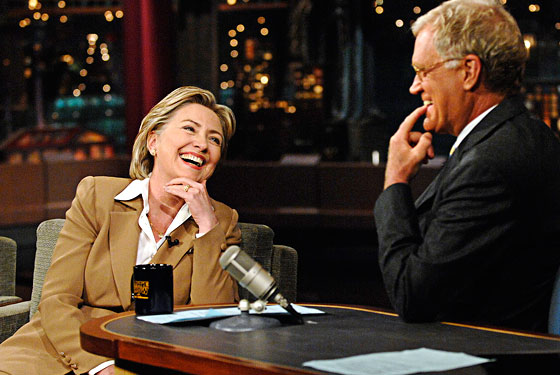 Last night, Hillary Clinton came to the city to appear on The Late Show With David Letterman. She decided, perhaps in order to stave off another unfunny Top Ten list of Dave’s, to bring her own. We’ve always sort of suspected that Hillary is kind of funny, in her own way – and the list is just that. Kind of funny, in a special, pearl-necklace-and-popped-collar way. Here are the top ten things she promises to do if elected president:

10. Bring stability and long-term security to The View.
9. Each year on my birthday every American gets a cupcake.
8. You will have the option of rolling dice against the IRS for double or nothing on your tax return.

7. If you’re having trouble getting a flight and Air Force One is available, it’s yours.
6. My vice-president will never shoot anybody in the face.
5. I’ll turn Gitmo into a Dairy Queen as soon as possible.
4. For over a century there have only been two Dakotas. I plan to double that.
3. We will finally have a president who doesn’t mind pulling over and asking for directions. Am I right, ladies?
2. I will appoint a commission to find out what the heck is happening on Lost.
1. One more pantsuit joke and Letterman disappears.

Thanks, Hill. The nod to late-eighties lesbian comediennes in No. 3 was not lost on us.

THE FEED
13 mins ago
what we know
what we know
Hurricane Ian Nears Another Landfall in South Carolina
By Intelligencer Staff
Georgia and the Carolinas are under states of emergency in preparation, while Florida struggles to recover.
17 mins ago
politics
politics
New Yorkers Could Get Paid to Report Illegal Parking
By Nia Prater
A proposed bill in City Council would allow people to report instances of illegal parking and receive a cut of the fine.
12:46 p.m.
tremendous content
tremendous content
Bonkers Revelations From Maggie Haberman’s Trump Book, Ranked
By Margaret Hartmann
If you want more information on Trump being weird with toilets and belittling Jared Kushner, Confidence Man has you covered.