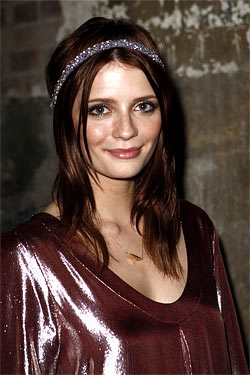 Mischa Barton is currently filming Assassination of a High School President with Bruce Willis in New Jersey, and the apartment she owns in Tribeca is rented out. So instead she’s taken up residence across the river, in Hoboken. “Every time I’ve come recently I’ve stayed in a hotel, which just feels lame,” the former O.C. star told us at Paper magazine’s dinner for its September cover girl, Rihanna, last night. “I’ve been hanging at friends’ flats in the city, and it made me want to get a place of my own.” Oh, that’s right, Mischa, you were born in London, where they have flats. We forgot. (Elsewhere at the party, Paper’s Mickey Boardman greeted guests in a sequined blazer, of the Elton John style. He prefers Rihanna’s “Breaking Dishes” from her new album over the more popular “Umbrella,” if you must know. “It shows a little bit of a rougher side,” he said.) “I think I need to be back here,” said Barton, who grew up in an apartment in the city. “I’m in my twenties now, and it would be nice to finally have my own place in the city. I like the East Village, Greenwich Village, and the meatpacking. I’m sort of a downtown girl.” Which is just as well. We needed a new haughty waif who thinks she’s British. Claire Danes is nearly 30. —Rachel Wolff

More Parties: Pictures and interviews from the New York premiere of Rocket Science.