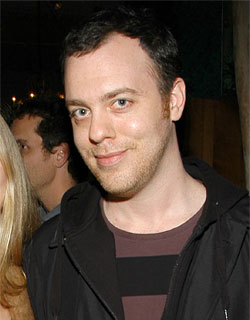 Looking through “Page Six” this morning, we were a little jarred by this sighting: “MAXIM Deputy Editor Chris Wilson howling out a Monkees song with N.Y. Observer writer George Gurley, followed by fellow Observer scribe Spencer Morgan and his girlfriend, Vanity Fair fashion editrix Alexis Stewart, belting out Heart’s ‘Magic Man’ at Sing Sing.” Hm, we thought – this must be the first time they’ve done an item about a former “Page Six”–er and his writer friends singing karaoke. We would chalk it up to August gossip fatigue, if we didn’t remember this item, from June 10: ” MAXIM deputy editor Chris Wilson and New York Observer scribe Spencer Morgan belting out Kenny Rogers’ and Dolly Parton’s infamous duet ‘Islands in the Stream’ at the karaoke joint Sing Sing. Morgan was the Dolly to Wilson’s Kenny.” Wow – two items about Wilson and Morgan at Sing Sing? We hope somebody’s getting some free tunes out of this, because otherwise, “Page Six“‘s quest to be the new TMZ.com is off to a rocky, rocky start.

Earlier: Page Six to Try to Take Over World, Make it Canoodley

+Comments Leave a Comment
‘Page Six’ Starts World-Domination Quest With a Scribe and a Song?