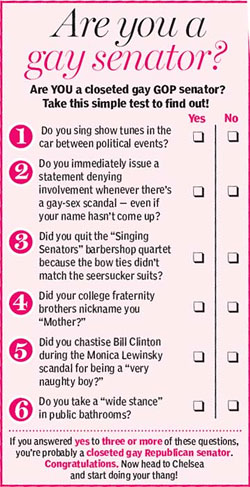 You know what? We’re getting pretty bored by the New York Post’s homophobia. For a while, we giggled at “Page Six“‘s use of archaic adjectives like “swishy” and “limp-wristed” to describe gay subjects. We tried to find the humor in cartoonist Sean Delonas’s offensive portrayal of cartoon queers (they’re always drawn with exaggerated lips and eyelashes, and one leg kicked flamboyantly upward). We always figured it was one or two holdovers from an earlier tabloid age that contributed these faux pas. But today’s Larry Craig–inspired graphic sidebar, “Are You a Gay Senator,” includes such juvenile, unfunny stereotypes that it’s clear the editorial staff still has no idea what’s appropriate. If blacks or Jews, for example, were painted in such broad strokes, there’d be widespread uproar. What’s most offensive, we think, is that none of it is ever funny. These are the people who came up with “Headless Body Found in Topless Bar” – they can’t even come up with a clever butt-sex pun?

Are You A Gay Senator? [NYP]

THE FEED
20 mins ago
early and often
early and often
The NYC Media Might Have Cost Democrats the House
By Eric Levitz
After New York outlets hyped rising crime, counties in the NYC media market voted more Republican than their immediate neighbors.
11:37 a.m.
world cup
world cup
The Five Most Dramatic Subplots Ahead of U.S.-Iran
By Benjamin Hart
As the geopolitical foes square off in Qatar, there’s a lot hanging in the balance.
8:00 a.m.
early and often
early and often
Joe Biden Is Realizing Trump’s ‘America First’ Vision
By Eric Levitz
The president is alienating allies and waging economic war on China to ensure America’s industrial supremacy.