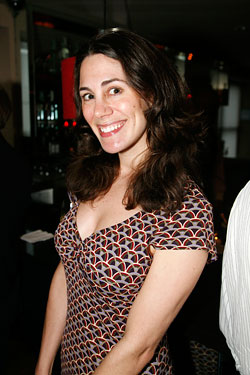 There’s already been much ado about Charlie Gibson’s refusal to play along with Stephen Colbert’s goofy “WristStrong” campaign, and the Times article that exposed the mini-controversy. Colbert asked the Gibson and Katie Couric and Brian Williams to wear bracelets on air in order to raise awareness of “wrist violence,” and Katie and Brian, the fun anchors, are playing along. In the article Huffington Post media editor Rachel Sklar said their participation shows “good humor” and “humanity,” and then Portfolio blogger Jeff Bercovici jumped on her for it — pointing out that the whole reason people like hearing the news from Charlie Gibson is because he isn’t fun, he’s serious. But our question is why was blogger Rachel Sklar quoted as a TV news expert in the first place? Why not someone with experience in the biz who could lend more insight — or an insider? Because the article was written by young Brian Stelter, a.k.a. the wunderkind behind the blog TVNewser, that’s why. Before he was recently hired by the Gray Lady, he was Sklar’s co-worker and buddy at Mediabistro. Silly Stetler — you can’t just quote your friends. This is the Times, not the Observer!