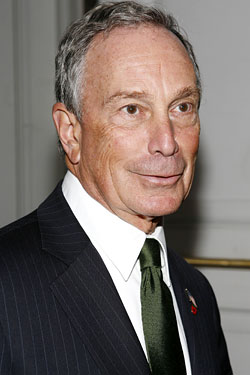 Ever wonder how Scrooge McDuck was able to
actually swim in all that money? Bloomberg knows.Photo: Getty Images

You haven’t, by any chance, been feeling rich lately, have you? Sort of feeling a little bit smug that the burst of the real-estate bubble won’t splatter all over you? At least a little bit excited that in November, your every-other-Friday paycheck will come three times instead of twice? Well, just in time for all that, Forbes has released its annual list of the 400 richest people in America. And guess what? Sixty-four of them are New Yorkers! The top 100 billionaires, in fact, include household (okay, apartment-hold) names like shareholder activist Carl Icahn, Revlon CEO Ron Perelman, designer Ralph Lauren, Condé Nast chairman Si Newhouse … oh yeah, and Mayor Bloomberg, who at $11.5 billion is America’s 25th richest man. According to Forbes, he more than doubled his wealth from last year, which was enough to leapfrog over rival media magnate Rupert Murdoch in the ranks.

Our favorite addition to the list, of course, is George Steinbrenner, all the way down at No. 380! At $1.3 billion, this is his first year on the list. Welcome, George — don’t think this means we’ll go soft on you in the postseason!

THE FEED
7 mins ago
tremendous content
tremendous content
Bonkers Revelations From Maggie Haberman’s Trump Book, Ranked
By Margaret Hartmann
If you want more information on Trump being weird with toilets and belittling Jared Kushner, Confidence Man has you covered.
1:10 p.m.
what we know
what we know
Hurricane Ian Nears Another Landfall in South Carolina
By Intelligencer Staff
Georgia and the Carolinas are under states of emergency in preparation, while Florida struggles to recover.
1:05 p.m.
politics
politics
New Yorkers Could Get Paid to Report Illegal Parking
By Nia Prater
A proposed bill in City Council would allow people to report instances of illegal parking and receive a cut of the fine.