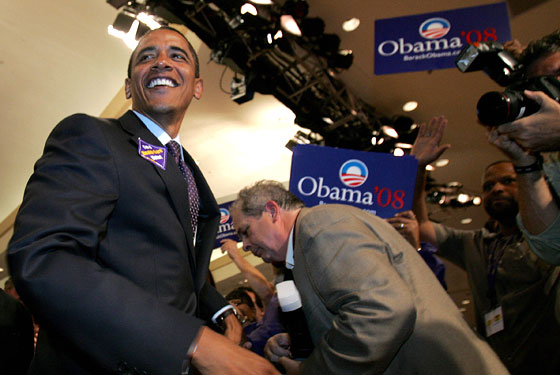 Barack Obama gave Wall Street executives quite the talking-to at the NASDAQ site in Times Square yesterday. The subprime-lending crisis, he indicated, had been provoked by greed, and he was verrrry disappointed in some greedy bankers’ behavior. “Our free market was never meant to be a free license to take whatever you can get, however you can get it,” he reproachfully told the floor full of moneymen. “If we are honest, I think we must admit that those who have benefited from the new global marketplace — and that includes almost everyone in this room — have not always concerned themselves with the losers in this new economy.” Then he made a conscience-cleansing offer: If everyone in the room would close his eyes, whoever took the lunch money from the middle class could come up to the front of the room and anonymously donate it to the Obama campaign, and there would be no questions asked.

+Comments Leave a Comment
All Bankers Should Report to Mr. Obama’s Office Immediately

THE FEED
5 mins ago
findings
findings
Why Spending Time With Kids Might Actually Help Protect You From COVID
By David Zweig
Two studies find an immunological downside for adults who stay away from children.
8:00 a.m.
first person
first person
I Lost My Brother Twice
By Alex Brook Lynn
First to schizophrenia, then forever to the city.
12/8/2022
sports
sports
Brittney Griner Is Coming Home From a Russian Prison
By Margaret Hartmann and Nia Prater
The WNBA star is headed home after being released in a prisoner swap for the notorious international arms dealer.