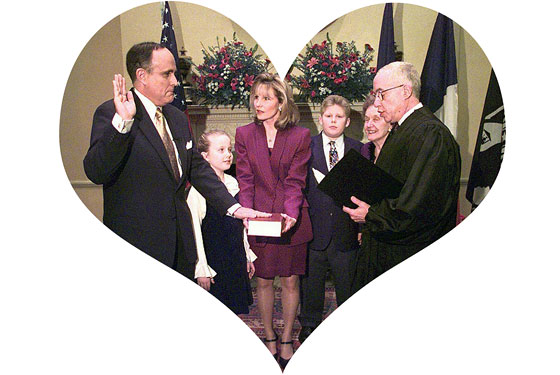 Yesterday, when we gleefully listed Michael Mukasey’s homeboy specifications (born in the Bronx, went to an UES yeshiva, etc.), we glossed over the most intriguing part: the current A.G. nominee’s extensive ties to Rudy Giuliani. The connections between the two deserve their own list. Not only did Mukasey swear in the mayor in both 1994 and 1998, he donated heavily to his presidential campaign; Mukasey’s son Marc works at Bracewell & Giuliani, Rudy’s boutique law firm; and both Marc and Michael are the Giuliani campaign’s judicial advisers. In fact, as a federal judge in the Giuliani era, Mukasey had to recuse himself from some City Hall–related cases because of his friendship with the mayor. Today’s Times even describes a less-than-hilarious prank Mukasey played on Giuliani in the seventies (it involved Rudy getting a job at a law firm).

This begs an obvious question: Will Mukasey’s very likely confirmation give Rudy an astonishing campaign advantage — a man of his own in D.C.? Are we looking at the filling of the first chair in the theoretical Giuliani cabinet? And why would George Bush hand Rudy such a splendid gift? The thrice-married, pro-choice hardass, whose perceived 9/11 heroics contrast mightily with My Pet Goat, can hardly be the president’s preferred successor. Now, if you’re experiencing a bit of déjà vu, it’s because all these questions have already been asked — about Bernie Kerik, another pal of Rudy’s summoned to D.C. Remember how quickly Kerik turned from an asset to an albatross, prompting fevered rumors that his doomed nomination to head Homeland Security was a way to pre-torpedo Giuliani? We doubt that a similar fate is in store for Mukasey, whose credentials seem spotless. Here, however, is another vaguely icky plot twist: Among other things on Mukasey’s docket, should he become A.G., would be Kerik’s indictment. We don’t even pretend to know what to make of that one.

An Old Friend Joins Giuliani in a Spotlight [NYT]