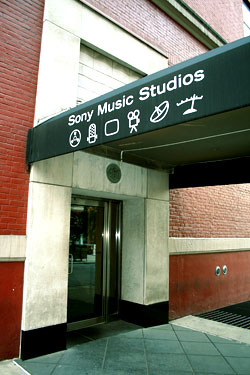 Sony Studios in Hell’s Kitchen, right down the street
from where your gay best friend lives.Photo: Tracy Morford

Hell’s Kitchen’s legendary Sony Studios closed last week, and its remaining contents will be auctioned off on September 10. It’s the latest in a string of big private studio closings (smaller or home recording rooms are now preferred, as they are cheaper and easier for record companies), and some fear it’s the death of a creative tradition that fostered unique collaborations and chemistry. “Walking down the hallways, Mariah Carey would be in one room and Marc Anthony in another,” recalls producer Phil Ramone. “There’s a community side to making music, so it’s a huge loss.” Indeed, former Sony manager Tony Drootin recalls Jay-Z and Beyoncé recording in side-by-side rooms (resulting in his rap on “Crazy in Love”), Michael Jackson stuffing a spare studio room with video games and a Stairmaster, and rappers from Busta Rhymes to Lil’ Kim guesting on each other’s records. When Drootin would leave at 3 a.m., “You’d see all these Bentleys and Lamborghinis on the street outside.”

Neighborhoods where many recording hubs were based, like Midtown West, are no longer cheap-space wastelands but prime new-construction territory. Like the Hit Factory (John Lennon’s Double Fantasy, Notorious B.I.G.’s Ready to Die) before it, the Sony building at Tenth and 45th is rumored to be turned into condos or a hotel. (Other recent casualties: Sorcerer in Soho, where Norah Jones cut Come Away With Me, and Fun City, where Sonic Youth and Helmet once recorded.) Greene Street, the Soho studio where classic eighties hip-hop records by Public Enemy and Def Jam were cut, shut down when landlord Steve Loeb realized he could make more money by renting out the space to commercial tenants (for $12,000 a month) than by making rap records. “I assure you that people who are file sharing could care less about all this,” Loeb says, blaming illegal downloads for record companies’ newfound thriftiness. “The only thing important in this city is real estate.” —David Browne

THE FEED
29 mins ago
just asking questions
just asking questions
How Frighteningly Strong Meth Has Supercharged Homelessness
By Benjamin Hart
Journalist Sam Quinones on the radically transformed picture of drug addiction in America.
8:10 a.m.
conservatism
conservatism
Why the GOP Will Lose Its War on ‘Woke Wall Street’
By Eric Levitz
Republicans can’t accept that they dislike modern capitalism, so they’re blaming “ESG” instead.
12/5/2022
volcanoes
volcanoes
Volcanoes Are So Hot Right Now
By Chas Danner
There have been some stunning eruptions at volcanoes on multiple continents in the past few days. No, the world isn’t ending.