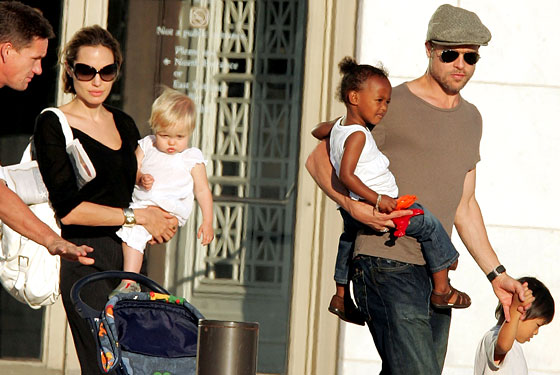 Oh yes! Oh no! Oh yes! Oh no! Brad Pitt and Angelina Jolie and their United Colors of Benetton brood are moving to New York City. “Page Six” reports that the family has been spending a lot of time at Angelina’s Upper West Side condo lately, and that they’ve enrolled their eldest son Maddox at the Lycee Francais. The Tomb Raider star has long said she likes to move the kids around to avoid the media attention, but we’ve always wondered — don’t they need other friends? It’s all well and good to hang out with movie stars all the time, but at some point, someone is going to need to beat the hell out of Maddox (for that G-D mohawk) or else he’s going to be warped for life. Hopefully, for his sake, they’ll stick around for a while. For our sake, well, we’re not sure how to feel. The last time we were so conflicted over a piece of news, it was when Heidi and Spencer got engaged on The Hills, which was like two weeks ago so apparently we confound easily.

THE FEED
8 mins ago
social studies
social studies
Do You Have a Right Not to Be Lied To?
Freedom of speech is being reconsidered by a group of legal scholars, who argue it is not absolute and may be outdated in a world of disinformation.
11/26/2022
politics
politics
What We Know About Trump’s Dinner With White Supremacist Nick Fuentes
By Chas Danner
The former president is claiming he did not know who his notorious dinner guest was.
11/25/2022
games
games
The U.S. Just Outplayed England at the World Cup
By Will Leitch
They were the better team in Friday’s scoreless draw — which is amazing.