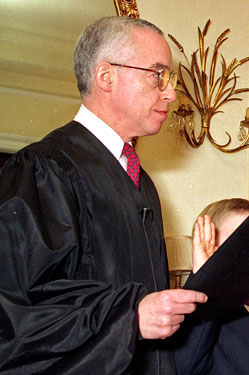 How about that attorney-general position? It’s as transitory as the seats on The View, no? According to the morning papers, the Justice Department’s latest benchwarmer will likely be a local boy: Bronx-born Michael Mukasey, a retired federal judge with formidable experience (he was a prosecutor during the Giuliani era and, after the 1993 bombing of the World Trade Center, presided over the trials of Jose Padilla and Omar Abdel Rahman). Other than the almost-sketchy (but not quite) fact that he and his son are currently serving as judicial advisers to Giuliani’s presidential campaign, there doesn’t appear to be anything particularly offensive about this guy. Even Senator Chuck Schumer, who loves him some outrage, is a fan: Mukasey “seems to be the kind of nominee who would put rule of law first and show independence from the White House,” the senator said in a statement yesterday. Well! We’re actually not filled with total despair! And at this stage of the game, if the administration doesn’t inspire bloodcurdling screams of outrage, even the littlest Hail Mary should be considered a total miracle.