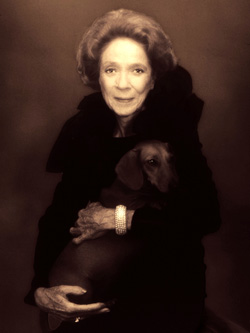 Death may have knocked Brooke Astor down, but it certainly didn’t keep her out of the fight. In the inheritance battle between her son, Anthony Marshall, and her legal guardians, Astor’s mental capacity has been called into question once again. Now Annette de la Renta and JPMorgan Chase, who took charge of her affairs in the year before her death, allege that she was unfit to change her will as early as age 98. Marshall, who stands to gain millions based on codicils signed after that, disputes this. He points out that she was older than 100 when doctors ordered her to “cut down on late night dancing and parties.” (And here we thought being 100 was all about pooping and People’s Court.) Marshall also claims that De la Renta bought the support of Astor’s staffers when she wrested guardianship away from him and fired one long-term housekeeper who wouldn’t turn against Marshall. It looks like all parties are settled in for a long fight, which should be fun, as Marshall himself is 83 and De la Renta is 75. Being rich and old: not so easy as we thought!

Lawyer: Astor may have been incompetent before will was written [Newsday]
Brooke Astor friend fired caretaker who opposed her – son [NYDN]

+Comments Leave a Comment
Brooke Astor: The Beat Went On

THE FEED
2:46 p.m.
on with kara swisher
on with kara swisher
Chemist Carolyn Bertozzi on Biology’s Dark Matter
By Intelligencer Staff
The 2022 Nobel Prize winner tells Kara Swisher why cancer cells are a lot like M&Ms.
2:08 p.m.
the national interest
the national interest
Trump Brought Nazis Into the GOP. DeSantis Won’t Expel Them.
By Jonathan Chait
White nationalism is not just a Trump problem.
1:52 p.m.
sam bankman-fried
sam bankman-fried
In New Interview, SBF Talks GOP Donations, Fraud, Polyamory
By Kevin T. Dugan
Sam Bankman-Fried talks to a YouTuber — and sure has a lot to say for someone under criminal investigation.

12:43 p.m.
early and often
early and often
The NYC Media Might Have Cost Democrats the House
By Eric Levitz
After New York outlets hyped rising crime, counties in the NYC media market voted more Republican than their immediate neighbors.
11:37 a.m.
world cup
world cup
The Five Most Dramatic Subplots Ahead of U.S.-Iran
By Benjamin Hart
As the geopolitical foes square off in Qatar, there’s a lot hanging in the balance.
8:00 a.m.
early and often
early and often
Joe Biden Is Realizing Trump’s ‘America First’ Vision
By Eric Levitz
The president is alienating allies and waging economic war on China to ensure America’s industrial supremacy.
7:30 a.m.
the city politic
the city politic
10 New York City–Based Charities I’m Giving To
By Errol Louis
Giving Tuesday is a great opportunity to help fix what’s broken here in New York and around the world.
7:00 a.m.
cover story podcast
cover story podcast
The Billionaire’s Epiphany
By Intelligencer Staff
We weigh the collateral damage of one man’s con and another’s hero complex.
11/28/2022
tremendous content
tremendous content
Mike Lindell Is the Leader the Republican National Committee Deserves
By Margaret Hartmann
But he’s not the one it needs right now, so his candidacy is probably doomed.
11/28/2022
early and often
early and often
The Last Time the Republican Establishment Tried to Stop Trump
By Ross Barkan
If you think Trump is finished, remember the 2016 primaries.
11/28/2022
foreign interests
foreign interests
A Stunning Wave of Protests Has Erupted in China Over Its Zero-COVID Policies
By Chas Danner
Demonstrations against COVID restrictions — and the government — took place in numerous cities across mainland China over the weekend.
11/28/2022
the money game
the money game
13 More Disturbing Revelations About Sam Bankman-Fried
By Kevin T. Dugan and Matt Stieb
It’s been weeks since the dramatic crumbling of his crypto empire, and we’re still learning about the mess left behind by Bankman-Fried.
11/28/2022
social studies
social studies
Do You Have a Right Not to Be Lied To?
By Jeff Wise
Freedom of speech is being reconsidered by a group of legal scholars, who argue it is not absolute and may be outdated in a world of disinformation.
11/26/2022
politics
politics
What We Know About Trump’s Dinner With White Supremacist Nick Fuentes
By Chas Danner
The former president is claiming he did not know who his notorious dinner guest was.
11/25/2022
games
games
The U.S. Just Outplayed England at the World Cup
By Will Leitch
They were the better team in Friday’s scoreless draw — which is amazing.
11/25/2022
early and often
early and often
One Worrying Sign for Democrats in the Midterm Results
By Eric Levitz
The gubernatorial elections in Georgia and Ohio suggest that a right-wing Republican could win moderate voters in 2024 merely by not being Trump.
11/23/2022
early and often
early and often
The DOJ Wants to Know What Mike Pence Knows About January 6
By Matt Stieb
Prosecutors investigating Trump’s attempt to stay in office reportedly want Pence to testify, which could spell big trouble for his former boss.
11/23/2022
tremendous content
tremendous content
Please Don’t Ruin Thanksgiving With These White House ‘Talking Points’
By Margaret Hartmann
I voted for Joe Biden because he tacitly promised I wouldn’t have to read any more guides to arguing with my Trumpy relatives.
11/23/2022
what we know
what we know
Alleged Club Q Shooter Previously Threatened Mother: Updates
By Chas Danner and Nia Prater
It is unclear why the 22-year-old suspect was allowed to retain guns after a previous incident involving police.
11/23/2022
mass shootings
mass shootings
Six Killed in Shooting at Virginia Walmart
By Margaret Hartmann
The gunman, who is believed to be a Walmart employee, opened fire in a break room before turning his weapon on himself.
11/23/2022
the national interest
the national interest
If DeSantis Wins the Nomination, Trump Will Endorse Him
By Jonathan Chait
Trump is out for himself, not revenge.
11/23/2022
screen time
screen time
Twitter Is Just a Guy Now
By John Herrman
At the company — and on the platform — there’s no escaping Elon.
11/22/2022
tremendous content
tremendous content
The Donald Trump–Elon Musk Feud: A Complete History
By Margaret Hartmann
Twitter’s new owner reversed Trump’s ban. But a few months ago, they were exchanging mean tweets and “truths.” Here’s the latest on the chaotic saga.
11/22/2022
tremendous content
tremendous content
You’re Now Free to Annoy Trump on Truth Social
By Margaret Hartmann
People who join Trump’s free-speech haven are no longer prohibited from “disparaging” Truth Social or irritating its employees.
11/22/2022
the money game
the money game
FTX Isn’t Just Bankrupt — Tons of Money Has Been Stolen
By Kevin T. Dugan
Sam Bankman-Fried’s crypto empire is getting dissected in bankruptcy court, where a lawyer said it was run by “compromised individuals.”