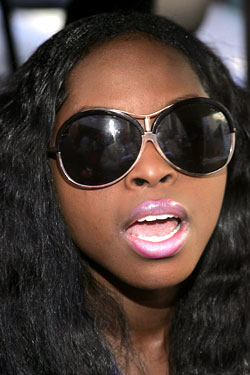 Yeah, we’re not sure we get it either.Photo: Getty Images

One suspects that Foxy Brown’s lawyers were attempting to invoke the Nicole Richie Sympathy Clause back in August when they claimed that the rapper, who faces a year in jail after breaking her probation, was three months pregnant. Silly lawyers, that doesn’t work for black people! When it became clear the judge was not about to reduce Foxy’s sentence for hitting a woman with a cell phone and violating probation, among other things, her manager changed his tune: She’ll be giving birth to a new album in prison, he clarified yesterday, not a baby. Brooklyn’s Don Diva, her first album since 2001, will come out in November. Don’t serve the time, Fox, let the time serve you.