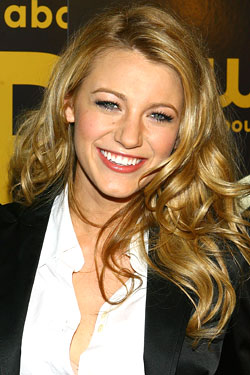 Doesn’t she just look like a high-school senior?Photo: Getty Images

At the Gossip Girl premiere party last night, things were running late. The bash started at 7, but by 9:30, cast member Blake Lively was still a no-show. Über-publicist Leslie Sloane-Zelnick loitered behind the red carpet, waiting. “I’m with Blake,” she told a reporter. Of course the biggest star in the show would work with Zelnick, who reps Jennifer Lopez and Anne Hathaway, and helped Britney and Lindsay back in their glory days. “Hey, all these kids are stars!” Zelnick insisted, but that’s not what it looked like. The rest of the show’s cast lingered upstairs at Tenjune, waiting until Lively turned up at 9:45 to enter the hellishly crowded party. The youngest talent, 17-year-old Connor Paolo (OMG! he played a young Colin Farrell in Alexander!) and 14-year-old Taylor Momsen (OMG! she played Cindy Lou Who in How the Grinch Stole Christmas!!) dawdled in a corner doing what else – gossiping. “The reporters asked me what ‘gossip’ is, and if I could tell them a rumor about someone one set,” said Momsen. “What did they ask you?” “They asked me if I had a crush on anyone in Hollywood, who would it be?” said Paolo. “They asked me for gossip, too. I said I wanted to punch Zac Efron in the face.” Wait, what? “Don’t you think everyone wants to see him get punched?” he asked. Wow, if possible, we love this show even more.