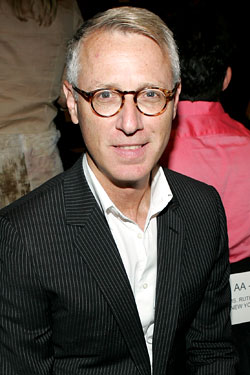 So this is what a man with a name like “Guy
Trebay” looks like. Huh.Photo: Getty Images

We are big fans of New York Times’ Guy Trebay, and we especially like it when, every once and a while, he goes and totally loses his shit, as he does in today’s Thursday Styles. In what is probably the best story we have read in that section ever, Trebay goes backstage at the Marc Jacobs show and casually yet charmingly shivs all of the celebrities and hangers-on there — Courtney Love, Lady Bunny, Padma Lakshmi, John Currin, etc. — right off the bat, by referring to them in the first paragraph as high school losers who have “avenged themselves on the Heathers of the world by becoming famous for something, sort of.” (Which is totally true by the way, but then, what does that make reporters?) It gets better from there.

He observes Victoria Beckham is “as shiny and expressionless as an inflatable doll,” drops that drug abuse is “chic,” and suggests the attendees of the Jacobs show are just like cross-section of humanity. “Historians looking for images to define the look and stratified textures of New York in our time could do worse than to consider paparazzi images from Jacobs shows.” Right! Of course! So these people were there, too? Cool! And because no Trebay piece would be complete without a rumination on the greater meaning of it all — hey, you have to justify your complicity somehow — there are statements like this, which actually caused us to have an acid flashback: “Cool, in the sense of Marc Jacobs shows, is like acupuncture. A mysterious electrical network regulates the system; manipulate one point and you trigger a remote response. The brain may be involved, but no one can tell you quite how. And although it is possible to diagram the energy vectors (music to fashion to art to photography) it would be impossible to dissect them under the knife.” And that’s not even all of it. If anyone needs us in the next hour, we’ll be in a quiet dark room, applying a cold compress.

+Comments Leave a Comment
Is Guy Trebay Partaking in ‘the Chic of Drug Abuse?’