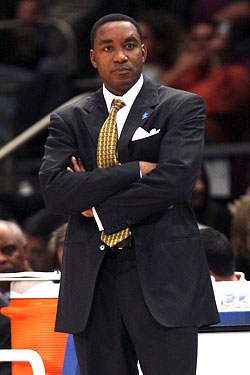 After the first day of Isiah Thomas’s sexual-harassment trial, we’ve learned that the Knicks coach is accused of calling a female vice-president a “bitch” and a “ho” in private conversations. Also, the VP, Anucha Browne Sanders, says he professed his love to her after a friendly game of horse. Sound confusing? How about this: When discussing season ticket sales with Thomas, she says he told her, “I don’t give a fuck about these white people!” (Apparently, having Woody Allen in your audience makes everybody white.) Already, sports fans are murmuring that Thomas and the Knicks should settle the suit. Stephon Marbury and a slew of other high-profile witnesses are set to testify, which is bound to make the team’s infrastructure look bad no matter the result of the trial. As for us, we’re just glad we found a reason to care about the Knicks again.