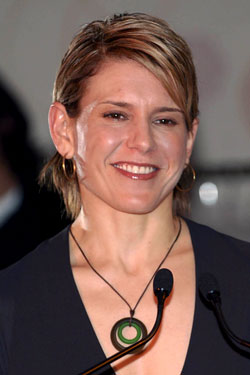 Alexis Stewart, who is not quite as good at the
“cheerful disdain” thing as her mother is.Photo: Getty Images

Is Martha Stewart’s daughter selling her Tribeca penthouse? Looks like she is judging from this $12.4 million Brown Harris Stevens listing for a four-bedroom, three-and-a-half-bath loft. A source in the know says it’s indeed hers and that it just hit the market two weeks ago. Apropos for the daughter of the domestic diva, the duplex is Blueprint-mag-pictorial ready (read sleek and clutter-free) and features a super-luxe kitchen with not one but two stainless-steel refrigerators and dishwashers. (There’s also some exercise equipment in the mezzanine, but we digress.) Last winter, Alexis, who co-hosts a talk show on Sirius Satellite Radio, bought three floors at the glassy 165 Charles Street, though press reports later pegged that purchase to her mother. It’s not clear whether she’ll be moving into the Richard Meier building herself. —S. Jhoanna Robledo

THE FEED
19 mins ago
what we know
what we know
5 Memphis Cops Arrested for Murder of Tyre Nichols
By Chas Danner
Footage of Nichols’s arrest and “savage” beating will be made public tonight.
9:00 a.m.
guns
guns
Coming Soon to Stores: The AR-15 for Kids
By Matt Stieb
Next month, an assault-style rifle could wind up in the hands of children unless regulators step in.
8:00 a.m.
early and often
early and often
The Data-Driven Strategy Behind Democrats’ State-Level Success in 2022
By Eric Levitz
The president’s party almost always loses state-level power in midterm elections. Here’s how Democrats bucked that trend last year.