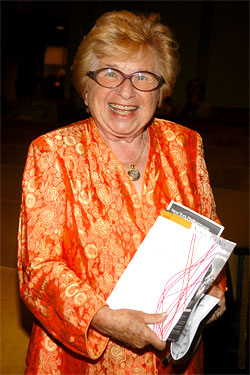 Sex follows some women everywhere, even the New York Philharmonic. Tuesday evening, Dr. Ruth Westheimer, 79 years of age and four-foot-seven in height, stood in the aisle waiting for Yo-Yo Ma’s opening-night performance. “Mort Zuckerman just came up and kissed me and said that I’m the best woman around,” she told New York. “And he had a date! She just stood there and smiled. What could she do?” She beamed. “It’s wonderful to be Dr. Ruth!” Westheimer had had a busy day. A study had just been released, showing that 55 percent of divorced women aren’t having sex, and everyone wanted her advice. “If she’s divorced and doesn’t have a partner, it makes sense,” she said. “But I hope that she keeps her libido, her desire for sex, alive. That she goes out, that she looks around if there are any eligible people, and if not, I do say that until she finds a partner, I want her to masturbate.”

“I want her to bring herself to sexual satisfaction so that I don’t see long faces and unhappy, frustrated people,” Dr. Ruth continued. “I can tell by the faces. Sometimes I walk down the main street in Zurich and see millionaires with long faces. I know what the problem is.” Tonight, however, she didn’t see any unhappy faces, onstage — “Anybody who has a passion, rock musicians and classical musicians, probably has a good sex life,” she said — or in the audience. “Anybody who doesn’t stay at home, who doesn’t say, ‘I’m tired, I have to be resting,’ these are probably people who have a good relationship with their bodies.” As if to prove her point, Todd Buckwalter, a 29-year-old investment banker sitting nearby, chose that moment to whip out a ring and proposed to his girlfriend, Ruth Willer, 26. Westheimer posed for pictures and doled out bedroom advice to the happy couple. “Did you see their faces?” she whispered afterward. “They don’t need me!” —Jada Yuan

+Comments Leave a Comment
It’s Good to Be Dr. Ruth