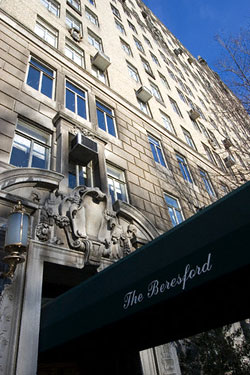 The Beresford Building, where the rich retreat.Photo: Corbis


(To be read in the voice of Robin Leach.)

Vikram Pandit, Citigroup’s newish head of alternative investments, is apparently not so bothered that CAI profit has dropped 40 percent since he started with the division, or that the Old Lane hedge fund he sold them for around $800 million dropped 5.9 percent last month. He’s just plunked down $17.9 million for Tony Randall’s apartment in Central Park West’s Beresford Building, a ten-room spread that occupies an entire floor. According to the listing, it is a “truly superb residence,” with “superb light,” “impressive park views,” herringbone wood floors, a fireplace, coffered ceilings, a butler’s pantry, wine storage, and a private elevator. But none of that matters to Pandit, who told New York earlier this year that he never got into “the Gordon Gekko idea of Wall Street.” He just really, really loved The Odd Couple.

+Comments Leave a Comment
It’s Good to Be Vikram Pandit