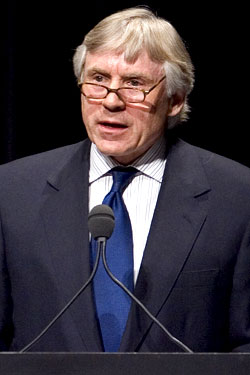 We never noticed it before, but Lee Bollinger looks
kinda like Gerard Depardieu.Photo: Getty Images

Only just yesterday morning, Columbia University president Lee Bollinger was about as popular as Alger Hiss during the Red Scare. His decision to invite Iranian president Mahmoud Ahmadinejad to speak during the annual World Leaders Forum was criticized everywhere: In newspaper editorials, by presidential hopefuls, not to mention all the students and protesters who hung around Morningside Heights, handing out flyers saying things like, “Bollinger, too bad bin Laden is not available.”
But since he laid his verbal smackdown on Ahmadinejad, boy has he bounced back! Immediately after the debate ended yesterday afternoon, Columbia’s student newspaper, the Spectator reported the university was being “flooded with calls to congratulate Columbia on the Ahmadinejad invitation … talk about a change of heart.” Seriously! It continued this morning.


Even the Post featured a picture of Bollinger with the headline U DA MAN and quoted him — “You exhibit all the signs of a petty, cruel dictator” — in their cover line. Newsday went with “Whack!” on the cover and “Bollinger Stands Tall in Controversy” inside. Oooh, but the Daily News is sticking to its guns! Michael Goodwin throws down, calling Bollinger’s hard line “Too Little Too Late.” “Bollinger … was in full damage control mode,” he writes. “He mixed facts with insults and threw them like a giant spitball.” So does Giuliani. But the most fervent of Bollinger’s critics appear to have been appeased: The Times notes that shortly after the speech the American Israel Public Affairs Committee sent out an e-mail transcript of Bollinger’s introduction with the subject line “A Must Read.” “The University loves him even more than they did before,” one Columbia student told New York. It’s a comeback bigger than Flava Flav’s! Isn’t that just the American way?

THE FEED
23 mins ago
poll position
poll position
What the Polls Say Today: It’s Warnock’s Race to Lose
By Ed Kilgore
Even polls that showed Herschel Walker leading in November now show Raphael Warnock slightly ahead.
12:13 p.m.
whodunnit
whodunnit
Somebody Shot Up a Power Station in North Carolina
By Matt Stieb
The identity and motives of the culprits remain a mystery as thousands struggle without electricity.
9:31 a.m.
just asking questions
just asking questions
How Frighteningly Strong Meth Has Supercharged Homelessness
By Benjamin Hart
Journalist Sam Quinones on the radically transformed picture of drug addiction in America.