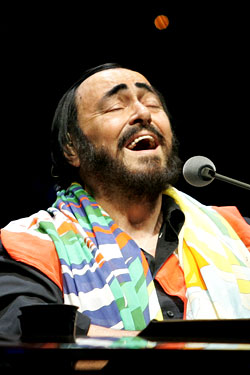 Beloved opera singer Luciano Pavarotti, who got his first big break at the Met, died early this morning at his home in Modena, Italy. The popular tenor (and talk show guest) succumbed to complications from pancreatic cancer at the age of 71, after a legendary career that included performances of many of opera’s best roles, and a streak of popular albums with the Three Tenors. Perhaps brightest star in the Metropolitan Opera’s galaxy, he had planned a farewell tour last year before his cancer was diagnosed. We’d make the obvious joke and say that somewhere in heaven there’s a fat lady singing, but we’re sure Pavarotti, for decades opera’s biggest voice, wouldn’t cede the spotlight.