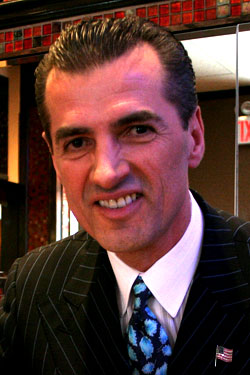 Osso Buco owner Nino Selimaj, who recently received a threatening letter from Douglas Band, Bill Clinton’s Fonzworth Bentley, that demanded he remove a photo of himself with Chelsea Clinton from the wall of his restaurant, has decided to stick it to the man. According to Selimaj, removing the photo would set a bad precedent. “We have Derek Jeter, we have Regis Philbin, we have Rudolph Giuliani, Danny Glover, Mariah Carey [and] Sopranos [castmates],” Selimaj told this morning’s Post. Crazy though he may be, Selimaj seems to be legally in the right.

We checked in with Columbia Law School professor Nathaniel Persily to find out what constitutional rights Seilmaj has. “As long as it was taken with her consent, it doesn’t matter if she’s a public figure,” says Persily. “If I’m out on the street and I take a picture with a willing stranger and put it up in my place of business, there’s no problem.” Persily finds Band’s claim the restaurant is using Chelsea’s picture as an endorsement shaky. “She’s not endorsing the restaurant. The guy’s just proud that he met her and he’s putting her picture up.” He probably wishes he snapped it after her hair got better, though.