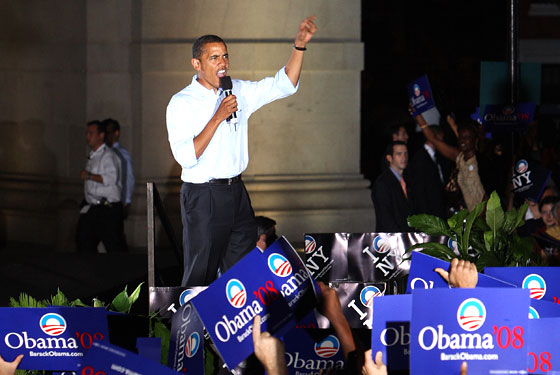 Oh, he put them over there.Photo: Getty Images

If only something truly interesting had happened, or been said, at the big Obama rally last evening in Washington Square Park, whose attendance organizers put (a mite inflatedly, it seemed to our eyes) at 24,000. All those cute, wide-eyed, multiculti NYU students herded into the main area in front of the stage. A few misty-eyed introductory remarks from actor Jeffrey Wright about his NYU days, and how the historical diversity of the park’s habituees parallels Obama’s vision for America. Then cue up Kanye’s heart-thumping “Touch the Sky” and the Opie-like candidate himself emerges from a phalanx of security, strides triumphantly through the park’s triumphal arch, and gives a robust but utterly unsurprising stump speech, wrapping it up by leading a call and response — “Fired Up! Ready to go!” — that he says he learned from a little old lady in some burg in South Carolina. The whole thing felt like some droid-y, hip-hoppified Nashville.

At least Xanadu lead Kerry Butler, that virtuosic Olivia Newton-John impersonator, was there to white-soulfully deliver the national anthem beforehand, her insanely adorable (non-white!) two-year-old daughter, Segi, in tow. It was far from her first public recitation of the star-spangled ditty. “I’ve been doing a lot of softball games,” she said. “I didn’t go to public school, so we actually didn’t have to sing it, so the first few times I had it in my pocket. But now I’ve memorized it.” And, yes, she was there not as a hired set of lungs but as a true-blue Obama Girl. “I love the work that he’s doing for Darfur,” she said. So would she invite him to Xanadu? “I would love to do it right now, but there’s too much security” — and even though a friend from Hairspray had offered to intro her to the Barackster after the rally, she had to go hustle into hair and makeup. Speaking of which, was she staying bang- and bump-free in her notoriously injury-inducing show? “I am,” she said. “Knock on” — she rapped on the metal gate that cordoned off press from the VIP ramp up the rally stage — “whatever.” —Tim Murphy

+Comments Leave a Comment
Obama at Washington Square: Where Did They Put all of the Dealers?