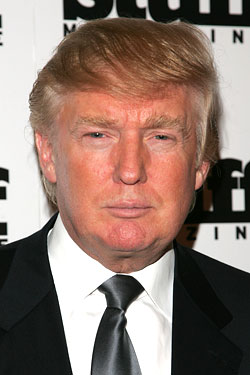 Donald Trump comes out a winner and a loser in the Post today. It’s reported that the city will back his 46-story condo-hotel in Soho, despite neighborhood protests that it will change the character of the area and that it violates zoning laws. The building is already eleven stories high, and Trump says, “it will be one of the finest buildings of its kind anywhere in the world.” Which is all great and happy-making, but we’re a little disappointed with his performance in his latest spat with former View host Rosie O’Donnell. “Page Six” reports that in O’Donnell’s book, Celebrity Detox, she takes some potshots at the real-estate mogul. She calls him “a slug,” “a torn scarecrow,” and “wrinkled, old and empty, with a Jell-O orange combover.” Pretty poetic imagery! But all that the usually verbose Trump can come up with in response was “Rosie is a loser and a very sad case — unattractive both inside and out. I’ll wager my book sells a lot more than hers.” Oh, come on! It’s Monday morning. At least call her fat!

Trump Triumphs [NYP]
Rosie and Trump ‘Slug’ it Out [NYP]

THE FEED
26 mins ago
2022 midterms
2022 midterms
Herschel Walker Didn’t Just Lose; Raphael Warnock Won
By Ed Kilgore
Walker was indeed a bad Trump-recruited candidate. But Warnock ran a very impressive campaign once again.
6:38 p.m.
tremendous content
tremendous content
Rudy Giuliani’s 5 Worst Excuses From His Attorney-Misconduct Hearing
By Margaret Hartmann
The former mayor has offered several bold arguments for why his efforts to overturn the 2020 election shouldn’t cost him his D.C. law license.
5:44 p.m.
exhibit a
exhibit a
The Trump Organization Was Convicted After a Truly Embarrassing Defense
By Ankush Khardori
Any lawyer would have a hard time convincing a jury of the company’s innocence, but these lawyers acted like buffoons.