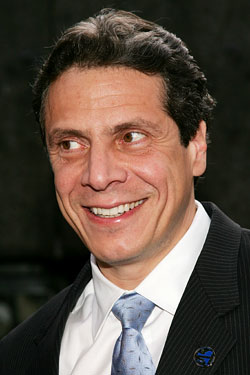 Why, he doesn’t look devious at all.Photo: Getty Images

Is Andrew Cuomo already falling victim to his own hubris? The attorney general earned some serious integrity points when he went after Spitzer for the governor’s alleged misuse of state troopers in pursuing Joe Bruno. Now, with two of Spitzer’s top aides out and the State Senate GOP increasingly subpoena-happy, the case is beginning to seem like self-admiring nitpicking on Cuomo’s part. Glenn Valle, the counsel to the state-police chief and current hot-seat occupant Preston Felton, is calling parts of the A.G.’s original report “very misleading or outright wrong.” Even worse, this largely petty skirmish — what are we going to do, impeach Spitzer? Jail Bruno? Publicly hang Darren Dopp and call it a day? — is paralyzing Albany in exactly the ways the administration swore it wouldn’t. But Cuomo isn’t done yet.

As of yesterday, the A.G. unearthed another headline-friendly cause without apparent payoff or consequence: He is demanding a probe of Facebook’s safety measures after his investigators, posing as teens, “were repeatedly solicited by adult sexual predators” on the site. This news comes almost simultaneously with none other than Microsoft’s reported interest in a 5 percent stake in the social network. Cuomo’s office is now in proud possession of such missives as “U look too hot” and “I’d love to get off on cam for you hun,” but so what? Safety lapses didn’t damage MySpace one iota — the site just tweaked the rules and issued a flurry of press releases about it.

Between these two pursuits, it’s almost like Cuomo has the notion of himself as Crusading Attorney General in the Spitzer mold, without having found any truly worthy enemies — except, interestingly enough, his main inspiration and predecessor. Well, well: Everything must be kosher on Wall Street and in the music and insurance industries these days.

+Comments Leave a Comment
Cuomo Barking Up All the Wrong Trees