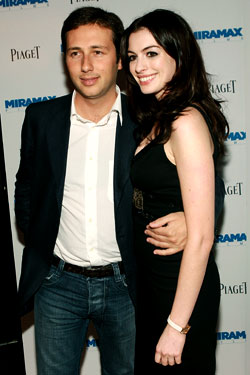 Anne and Raffaello: Will their love endure?Photo: Getty Images

So it appears that the Clintons have made another unwise real-estate investment, this time with Raffaello Follieri, more commonly known as Anne Hathaway’s boyfriend. According to today’s Journal, after being introduced to Follieri by an aide, the Clintons got buddy Ron Burkle to invest up to $100 million with the young Italian, who said he was planning on buying and developing property for the Roman Catholic Church. Now Burkle is suing Follieri, alleging that he barely bought any churches and instead used everyone’s investment money to fund a “lavish lifestyle.” This all looks not great for the Clintons: What with Whitewater and Norman Hsu and all, they’re starting to look kind of gullible. Maybe they’ll go into time shares next. But enough about them: What does this mean for Anne and Raffaello?

Was the $22 million, 27-foot-wide, four-story Greek Revival mansion on Gramercy Park they looked at back in August (“The two went in with brokers and then came out and began making out on the steps,” a spy told the Post) going to be purchased with Clinton cash? Does Anne feel betrayed? Will they make it through this awkward situation? “At the end of the day, we’d rather be in a difficult situation with each other than be in an easier situation with someone else,” Anne told Teen Vogue this summer. But how difficult is too difficult?