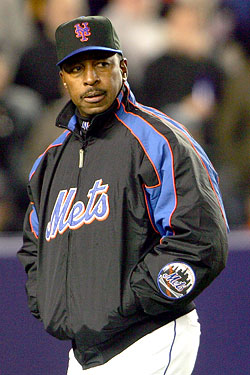 Willie Randolph cried. After the worst late-season collapse in baseball history, the Mets manager spoke to his team. Tears welled up, his voice cracked, and players later told reporters that the stoic manager actually wept. It was out of character and emblematic of the fact that what happened to the Mets (or, rather, what they did to themselves) was just sadder than anything else. Today in the papers where fans who were denied postseason play should have at least gotten to enjoy a spirited round of the blame game, there was surprisingly little finger-pointing at Randolph. It was almost as if the sportswriters felt … bad for him.

Sure, everyone speculated on what this would mean for Randolph’s extended contract with the Mets. But nobody went so far as to call for his head. “Firing Randolph is not the answer,” explained the Times’ William Rhoden. “The Mets finished over .500 in his first season, and they won 97 games last year.”

Tom Glavine got a lot of flack, after his worst-ever personal opener left the team seven runs behind yesterday, but both the Daily News and the Post cautioned that all blame shouldn’t be placed on his head. The Daily News reminded us that Jose Reyes also let us down. Surprisingly few people (with the notable exception of the commenters on the News discussion board) have begun to rail against Omar Minaya.

Can it be that everybody’s getting off a little bit easy? Of all people, the most obvious target for fan rage is definitely Randolph. But in a Newsday Web poll, as of this morning, readers are nearly split 50-50 on whether he should get the boot. It’s almost as if everybody feels sorry for him. Which, knowing that he broke down into tears in front of his team, is hard not to do. Except when you remember — there’s no fucking crying in baseball.

Earlier: As the Mets Swoon, Should Randolph Blame Minaya?

+Comments Leave a Comment
After Mets Loss, Nobody Even Wants to Play the Blame Game