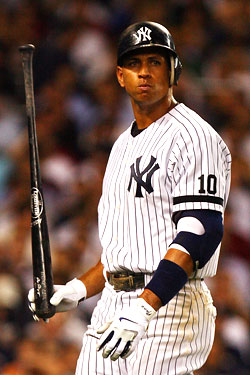 Oh, A-Rod. That head was once big enough to hold
all our dreams.Photo: Getty Images

Did you hear that the Red Sox won the World Series last night? No? Was it because everybody was talking about how A-Rod went free agent, as was announced during the game? After Rodriguez’s shameless agent, Scott Boras, upstaged game four by releasing the news during the early innings, it was all anyone could yammer about. Sure, the Series had been a little boring, and yeah, A-Rod has no reason to love the Sox, but couldn’t they have at least thrown the Rockies a bone? A young team with a thrilling (if disappointing) moment in the spotlight, having their last moments in the sun robbed by a man who is just hoping to make more money next year. Kinda sucks, huh? Anyway, if you didn’t hear about the Red Sox last night on TV or radio, surely you saw the news in this morning’s paper. Oh, you didn’t? You must read the Daily News or the Post, where the Series news was relegated to tiny text ribbons on the front and back pages, dwarfed by coverage of the Yankees. Well, just FYI: The Red Sox won the World Series. Not that you wanted to know. You’re a New Yorker, after all.

A-Rod Putting Himself Above the Game [ESPN]