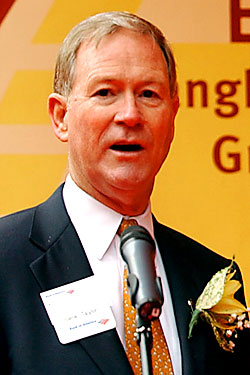 Embattled CEOs like Citigroup’s Chuck Prince, whose departure has been rumored and longed for since he announced profits were down by 60 percent last month, and Merrill Lynch’s Stan O’Neal, who the other day announced they’d be taking $8.4 billion — that bears repeating: $8.4 billion — in write-downs, ought to take a cue from Bank of America’s Kenneth Lewis, who after reporting a 32 percent drop in third-quarter results decided to do like a smart despot and start executing his cronies before the people start marching him to the gallows. Last night, Lewis announced a restructuring of the bank, which includes the “early retirement” of B of A head of investment banking R. Eugene Taylor, above, a trader for some 38 years and a longtime tennis buddy of the CEO’s. He’ll be replaced by Brian Moynihan, a bright young thing who will move from Boston to New York to take over the division. But Moynihan has never run a capital markets unit before now, and honestly, with the Red Sox in the World Series, how popular will he be in New York?

+Comments Leave a Comment
Bank of America’s Friends: One Is Silver and the Other’s Gold